this is the top bar section 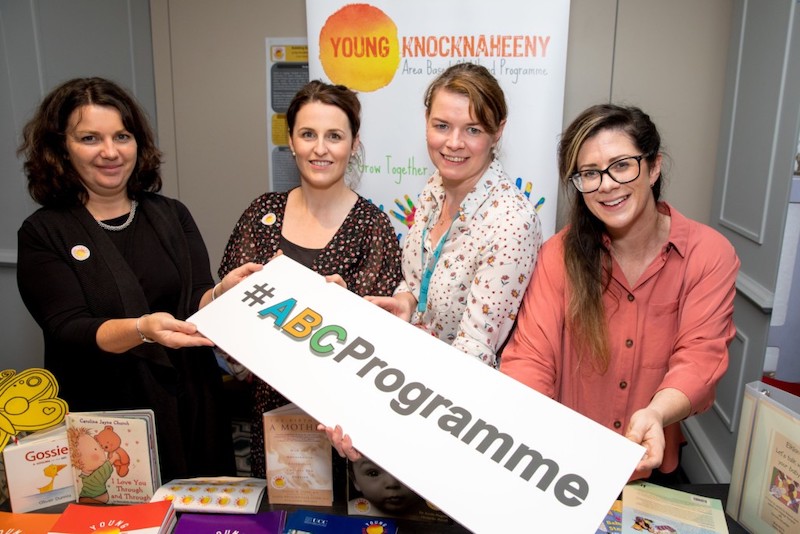 Attending a national showcase to share learning and plan for the future of the Area Based Childhood (ABC) Programme were [Name of ABC staff including, names of those in picture]. The event enabled the 12 local initiatives who comprise the ABC Programme to present their work, which is focused on delivering prevention and early intervention programmes to support young families. Photography: Conor Healy / Picture It Photography

The 12 Area Based Childhood (ABC) initiatives, including Northwest of Cork City based Young Knocknaheeny attended a national showcase on what has been achieved to date and to plan for the future.

The event enabled all of the initiatives who comprise the ABC Programme to exhibit their work, which is focused on delivering prevention and early intervention programmes to support young families.

Young Knocknaheeny’s, Programme Manager, Katherine Harford said it was of great value to present the work delivered in the Northwest area of Cork City and to also learn about the learnings of the 11 other initiatives.

“Since 2015 Young Knocknaheeny has delivered evidence-based prevention and early intervention programmes. In excess of 7,000 parents, children and staff have benefitted from our services. Locally Young Knocknaheeny is supported and works closely with a range of service partners such as the City Council, HSE, TUSLA, UCC, schools, libraries and community and voluntary organisations. Young Knocknaheeny also includes the voices of children and parents in the design and delivery of its work.

“It has been very valuable to learn what other initiatives have achieved, within their communities, and what has worked best. It is also very important that as colleagues we agree a shared view on how to take this work into the future for the benefit of as many families as possible.”

Prevention means developing strengths, supports and strategies to prevent a problem from arising. Early Intervention means anticipating, identifying and addressing problems as they arise or escalate.

Each of the ABC’s provide high-quality, evidence–based supports, working with statutory and community organisations to achieve better outcomes for children and their families. These include parenting, literacy, health and education programmes.

Looking to the future it was discussed that the ABC Programme should have a strong focus on Child Poverty – working together with the DCYA, Tusla and the UNESCO Child & Family Research Centre at NUI Galway.

The initiatives are all members of the Prevention and Early Intervention Network (PEIN) which is currently developing a Framework on how Outcomes will be measured in future programmes.

The ABC Programme is funded by the Department of Children & Youth Affairs (DCYA) and aligned with Tusla through the Prevention, Partnership & Family Support (PPFS) Programme.

The findings of the National Evaluation of the ABC Programme 2013-2017, carried out by the Centre for Effective Services (CES) was published last year. It found a positive contribution across the 12 initiatives and identified the following benefits:

Furthermore, service provision in localities where the initiatives are based was found to have changed in three main ways:

Background to the Area Based Childhood (ABC) Programme

The ABC Programme is a national prevention and early intervention initiative targeting investment in effective services to improve outcomes for children and families living in areas of disadvantage.

The ABC Programme was established in 2013 in line with the commitment in the Programme for Government to adopt an area based approach to tackling child poverty. The programme builds on and continues the work of the Prevention and Early Intervention Programme (PEIP) 2007-2013 which was co-funded by the Department of Children and Youth Affairs (DCYA) and The Atlantic Philanthropies (AP). In 2018 ABC was aligned with the Prevention, Partnership Family Support Programme (PPFS) in Tusla.

We use cookies on our website to give you the most relevant experience by remembering your preferences and repeat visits. By clicking “Accept”, you consent to the use of ALL the cookies. However you may visit Cookie Settings to provide a controlled consent.
Cookie settingsACCEPT
Manage consent

This website uses cookies to improve your experience while you navigate through the website. Out of these cookies, the cookies that are categorized as necessary are stored on your browser as they are essential for the working of basic functionalities of the website. We also use third-party cookies that help us analyze and understand how you use this website. These cookies will be stored in your browser only with your consent. You also have the option to opt-out of these cookies. But opting out of some of these cookies may have an effect on your browsing experience.
Necessary Always Enabled
Necessary cookies are absolutely essential for the website to function properly. These cookies ensure basic functionalities and security features of the website, anonymously.
Functional
Functional cookies help to perform certain functionalities like sharing the content of the website on social media platforms, collect feedbacks, and other third-party features.
Analytics
Analytical cookies are used to understand how visitors interact with the website. These cookies help provide information on metrics the number of visitors, bounce rate, traffic source, etc.
Advertisement
Advertisement cookies are used to provide visitors with relevant ads and marketing campaigns. These cookies track visitors across websites and collect information to provide customized ads.
Save & Accept
Powered by